This post of my diary comes a little late just because of some very busy weeks and some days off to visit my family in Switzerland... but nevertheless here are a few pictures and comments about building the outer backbonestructure, the keel and the stem.
As visible on the photo to the right we laminated relatively heavy boards of sapele on to the outside of the hog which is slightly bend towards the bow. These boards are 1" (25.4mm) thick and can hardly been called veneers... however they build a quite substancial keel with a gap in the centreboardarea at midships where the lead ballastkeel later will be fitted. 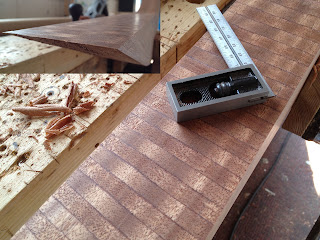 On the bowside the outer stem had to be fitted with a glued scarfjoint. While planing the scarfsurface on the stem all the kaya mahogani veneers appear in a regular and quite decorativ pattern. Ideally this surface should be deadflat to get very high quality joint. 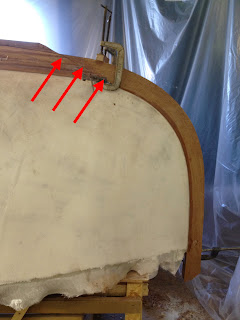 And finally as seen on the following picture the stem is glued on the apron (innerstem).

After the laminationwork the whole keel and stem had to get his final shape.
For an effective way of working we used the electroplaner first and then did all finetuning by handtools as usual.
At both ends of the ballastkeelgap we chiseled a tenon to give the leadkeel which will come with the fitting mortise a better fixation. 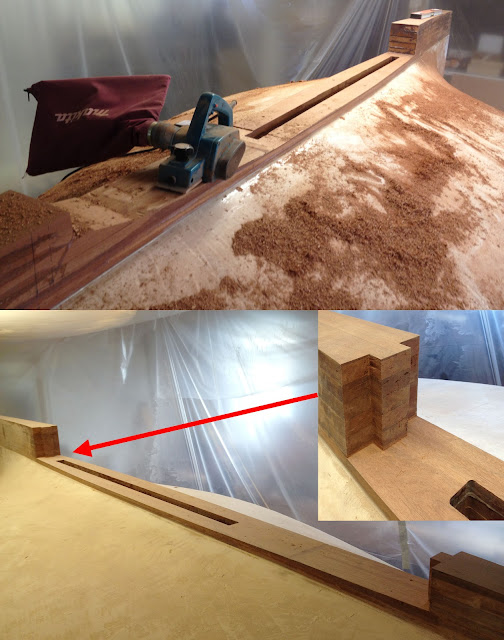 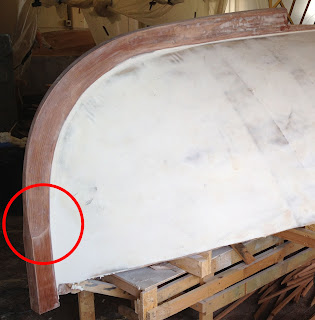 The stem gets the traditional cutwatershape as shown on the photo. So the frontsurface which will "cut" the water will be reduced to only 1" and at the end when skrewing on all fittings we will put a brass keelband on the stem to protect it from potential dammage. 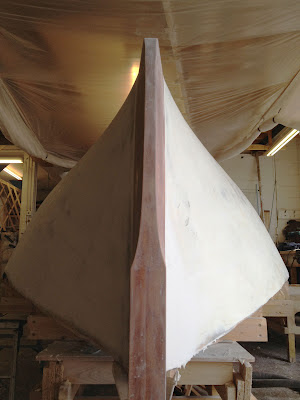 Finally I want to write about the ballastkeel.
Well, as mentioned before Glóey will have a cast ballastkeel in lead. It is a longkeel with a slot for the centreboard, 2.3 m long and 1000 Lb (455 kg) in weight. The ballastkeel will be fitted with 9 3/8 siliconbronze bolts to the backbonestructure. 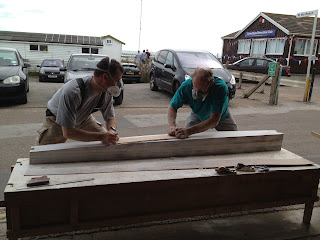 After having received a quote from the UK foundry Irons Brothers in Cornwall for about 4900.- £ to fashion the leadkeel after drawings I had to think about alternatives to bring the costs down.
First I was thinking of casting the lead keel by myself but after some internal discussions and considering the allready very tight timeschedule I decided to just build the plug or pattern (male mould) with my team and only buy in the leadcasting. Consequently the costs dropped about 40%.
Ok, so here is the plug we've made in solid MDF and which has got covered with some filler and EPU paint for a harder surface and better release out of the sandform. 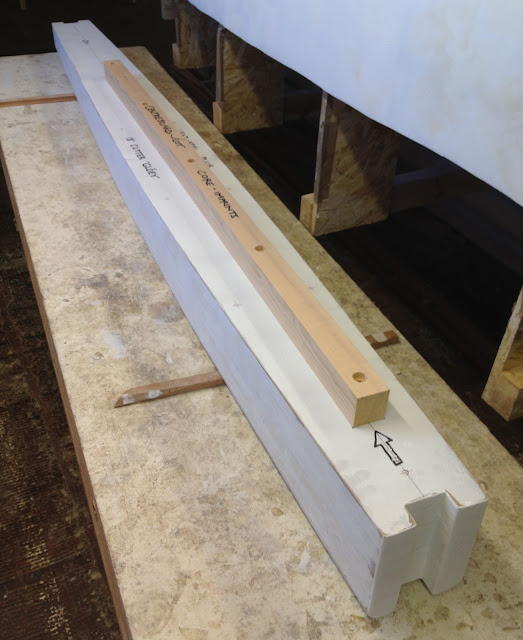 from Dominik Gschwind at 13:52 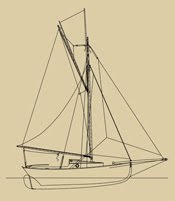